Edward Simon, a native of Venezuela, has made a name for himself over decades in America as a jazz improviser, composer-arranger and band leader, with his profile heightening in recent years as he has explored the commonalities jazz can have with the folkloric sounds of Latin America. Based in the San Francisco Bay Area, as a member of the all-star SFJAZZ Collective, he has been a Guggenheim Fellow along with being awarded multiple composition grants as part of the Chamber Music America’s New Jazz Works initiative. Simon, a Yamaha artist, has recorded 16 albums as a leader or co-leader; his latest is Solo Live, released via Ridgeway Records in October 2021. This follows Simon’s 2020 album 25 Years and his 2016 album Latin American Songbook, with the four-and-a-half-star DownBeat review praising its “grand and sophisticated” sound. Latin American Songbook also won Simon an NAACP Image Award for Outstanding Jazz Album.

The Edward Simon Trio hails as one of today’s top jazz piano trios, performing what has been referred to as “expansive and sophisticated jazz.” (Matt Collar, AllMusic review.) The trio has been playing together for fifteen years and has performed at some of the top venues and festivals including Jazz Standard, the Village Vanguard, Casa del Jazz, and SFJAZZ. The trio members are some of the most highly regarded musicians on the current jazz scene.

The three musicians making up the Edward Simon Trio share numerous affinities including a profound understanding of form, and the various multi-cultural currents that inform jazz today. After several years of touring in the U.S., Europe, and Japan, the trio members have formed a strong bond that can be heard in their performances.

Simon’s current focus for this exceptional trio is playing his compositions and arrangements of Latin American standards. The 2016 recording for Sunnyside Records, titled Latin American Songbook, brims with lyricism, color, and groove, giving instrumental voice to songs originally made famous by such singers as Caetano Veloso and Mercedes Sosa.

Magos Herrera was born in Mexico City and is currently based out of New York City, Herrera is a dazzling jazz singer songwriter, producer, and educator. Declared as “One of the greatest contemporary interpreters of song” by The Latin Jazz Network Magos is one of the most active vocalists in the contemporary Latin American jazz scene, she is best known for her eloquent vocal improvisation and her singular bold style, which embraces elements of contemporary jazz with Ibero-American melodies and rhythms. Singing in Spanish, English, and Portuguese, Herrera”s style elegantly blends and surpasses language boundaries. Throughout her career, Magos has garnered important awards and recognitions, including a Grammy short- list nomination in the Best Jazz Vocal Album category for her album Distancia (2009), and she is the only female artist to have received the Berklee College of Music’s Master of Latin Music Award. Magos is well known for championing women’s causes and as a promoter of gender equality, She served as spokesperson for UN Women, and has contributing to UNITE to end violence against women and He For She. Additionally, Herrera serves as an artistic advisor of the “National Sawdust”, one of Brooklyn’s most innovative venues, and as a frequent collaborator for radio and TV, Magos produces and hosts a weekly radio program from New York for Mexico’s Public Radio.

Percussionist Luis Ernesto Quintero Vegas was born in Caracas, Venezuela. (He goes by Luis Quintero.) Quintero was a child music prodigy and hails from a lineage of distinguished musicians and singers. He has participated in over 700 musical productions spanning a variety of music genres and has over 60 Grammy or Latin Grammy Awards to his credit. His most recent Grammys were in 2019 with Chick Corea & The Spanish Heart Band for the Best Latin Jazz Album and in 2018 with Spanish Harlem Orchestra for the Best Tropical Latin Album.

I’d like to express my sincere gratitude to all of the musicians for their wonderful playing and specially to Magos for putting so much of herself into this project, Femeninas could not be what it is without your beautiful voice, amazing talent and breadth of knowledge. I’d also like to thank Bonnie Barret and the entire team at Yamaha Artist Services for their support. Special thanks go to all ArtistShare project participants for helping me realize this project. –Edward Simon

This recording is made possible with the support of Jazz Road, a national initiative of South Arts, which is funded by the Doris Duke Charitable Foundation with additional support from The Andrew W. Mellon Foundation. 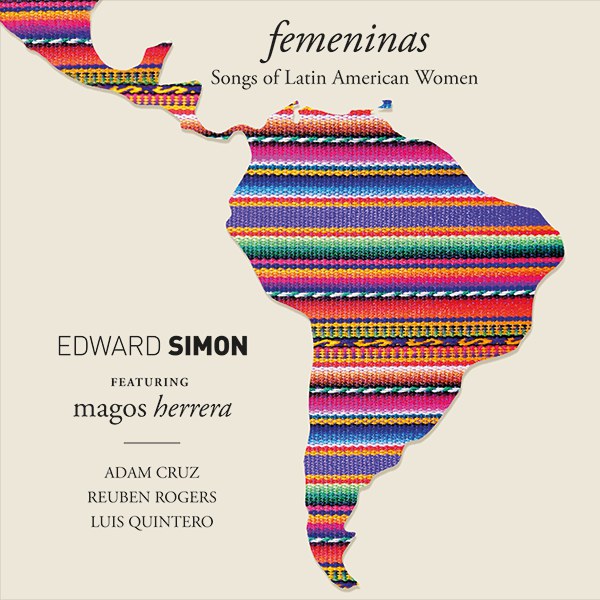