Uptown Vocal Jazz Quartet
Fools for Yule
Uptown Vocal Jazz Quartet is back just in time for the holidays! The singing foursome and their supporting musicians have put their creative stamp on the timeless art of sizzling, swinging 4-part harmony vocal jazz over the years with their original songbook recordings (e.g., “Hustlin’ for a Gig,” 2012) and collaboration album with alto saxophonist Richie Cole (“Vocal Madness,” 2014). Now Uptown Vocal Jazz Quartet has released a holiday album which dishes up a smorgasbord of brand new original holiday songs by the group’s leader, songwriter/arranger Ginny Carr Goldberg (“Fool for Yule,” “Whisper,” “It Doesn’t Feel Like Christmas” and more), along with their delightfully fresh takes on such holiday classics as “Winter Wonderland,” Irving Berlin’s “I’ve Got My Love to Keep Me Warm,” Vince Guaraldi’s “Christmas Time is Here” and Mel Tormé’s iconic “The Christmas Song.” Uptown Vocal Jazz Quartet’s celebrated songwriting, hip arrangements, joyful delivery and eclectic performance range are on full display with this very special seasonal album. Will a new holiday standard or two emerge from “Fools for Yule?”

There is a story behind most of the songs on this album, which has been in the works for many years. Since it’s a Christmas album, we knew it would have legs for years to come and get played during those brief days of nostalgia in many households every December, so we wanted it to be something memorable for a lot of people on many different levels. As you know, I’m a songwriter and I didn’t want to do an album of strictly holiday favorites like anyone can do, but rather, showcase some more of my own originals.

I wrote “Fool for Yule” because I wanted to give a nod to the “Baby it’s Cold Outside” conversational duet that everyone loves and see if I could get some recognition in that realm.

I wrote “Whisper” because Christmas is a beautiful time and I wanted to write something beautiful to commemorate love at Christmas.

I wrote a song about love in the wintertime in FRENCH (“L’Amour Nous Entoure Ce Soir”) because I love the French language and culture, and we have musical friends in France, so this was something special for them.

And I wrote “It Doesn’t Feel Like Christmas” for no particular reason except that it was a sentiment that a lot of people, sadly, have during the season. Confession, I thought it might have a shot at being included in a soundtrack for some future sappy romantic comedy movie like they always release during the holidays (present day Meg Ryan/Tom Hanks holiday movie material!). But we’ll see. I wrote it years ago, but my husband pointed out that it could have a whole new sentimental significance for all those folks who lost loved ones to COVID. So sad.

We ended the album with “Silent Night” because it’s a Christmas record and that is such a beautiful, peaceful song. It’s like a kiss goodnight at the end of the romp. My brother Keith, an accomplished Irish traditional musician, is featured playing on it. And yes, we included a dedication to Andre with a reference to Silent Night’s beautiful lyric, “sleep in heavenly peace.”

One more original – “Santa Dear, Where’s Mine?” – was written by Holly’s (our soprano’s) mother years ago. She was a wonderful lady and died suddenly and unexpectedly at age 72 a few years ago after a hospital procedure. Holly, her only child who was very close to her mother, was devastated and so were we. When Holly was sorting through her mom’s things after her death, she found some songs that Mom had written (actually partially written) and wanted to know if we could pay tribute and include one of them on our Christmas album. I said yes and chose the cute/naughty “Santa Dear Where’s Mine?”, which I completed and arranged for us to perform. It’s very special to Holly and all of us for very personal reasons. And we thought it was a fun departure in that “Santa Baby” vibe!

And of course, I arranged several holiday favorites, as you pointed out. We know people want to hear the classics at Christmas! The outlier on there is a classical song written by Samuel Barber, “St. Ita’s Vision.” Not a pop song, but another personal memory. I was a voice major in college back in the 70’s and I sang that beautiful song at my senior recital. My bandmate Robert has been my friend and colleague in this venture for over 40 years and he wanted me to reprise it. So I sang it once again, after 45 years! Something just for us.

Way more information than you needed, but like I said, this album is the culmination of many musical and personal memories, and we hope there is something on there for everyone!

Yes, there are a lot of small details in the “Paul is Dead” vein and a few inside jokes in the artwork. On the front cover are the four of us at the party (see attached), and Robert is arriving with a fancy gift bottle of some fictional brand of Scotch (we labeled it “Glen Bias” because we recorded at Bias Studios). On panel 2 inside, the Scotch bottle was put down on the bar very close to the cookies for Santa. If you look closely you’ll see that on panel 3 inside, the bottle has been opened and some of it has been consumed. It all comes together on the back cover (see attached) where we see Santa (who is actually our recording engineer Bob Dawson, a dead ringer for Santa Claus!) in his home at the North Pole after the Big Night, listening to our new CD in his headphones and sipping the bottle of Scotch, which he thought was meant for him since it was right next to the Santa cookies and milk. Waiting patiently in the bedroom doorway is Mrs. Claus, played by Holly’s late mother Marilyn Shockey, who wrote “Santa Dear, Where’s Mine?” On the wall in Santa’s man cave behind him are photographs of Santa with celebrities through the ages (Abraham Lincoln, Ruth Bader Ginsburg, Marilyn Monroe, Frank Sinatra, Richie Cole (!), and my optometrist HUSBAND Fred, fitting Santa for new eyeglasses. Lots of fun details amidst the story. 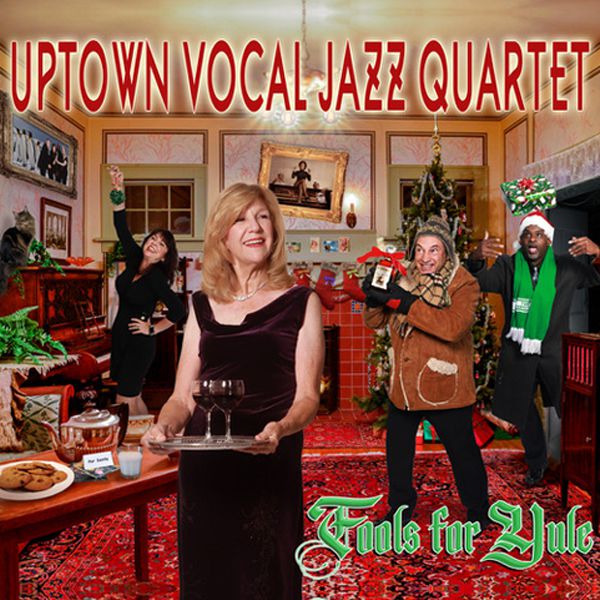 Listen to:
“Christmas Time Is Here”