ABOUT THE ALBUM
Miró Henry Sobrer’s album, Two of Swords, recounts his struggle to find peace amidst conflicted feelings and thoughts after his father’s death in 2015. Following his father’s death, Miró found himself alone in a world full of political, environmental, and spiritual division. The music of Two of Swords reflects that world and the process of coming to peace with it. This album invites the listener to reflect on those dualities in their own life and to find the peaceful center that lies between them. Vivid poetry, and lush, surreal soundscapes that traverse a variety of jazz, classical, latin, and folkloric music join together to form this sound meditation. In order to take the listener on this journey, the album musically interprets a tarot card, based on the eponymous card from Miró’s father’s tarot book, The Book of Oracles, or a Poet’s Tarot.

ABOUT THE MUSIC
Two of Swords, dedicated to Miró’s Catalan father, Josep (Pep) Miquel Sobrer (1944-2014), is an homage to Miró’s heritage and a recollection of his grief.

His father, an accomplished writer, translator, and scholar of Spanish and Catalan literature, wrote his own tarot book in a poetic format. The album centers around Josep’s text version of the Two of Swords tarot card.

The album features plentiful spoken poetry: the prose-poem corresponding to this card from Josep’s tarot book, and some sonnets by another Catalan poet Josep Janés i Olivé, whose poems accompany Miró’s twisted-arrangement of a song cycle by the renowned Catalan composer Frederic Mompou.

As for the music itself, the album starts with spoken words from the first half of the “Two of Swords” entry in Josep’s book, accompanied by a muted trombone duet that foreshadows the melody from “Unity Suite part two”. This introduction leads into an epic arrangement of Mompou’s song cycle “Combat del Somni (Dream Combat)”. Miró’s arrangement contrasts starkly from the original due to his unique approach. He strips the original music of its flesh until all that remains is a skeleton which becomes a seed to nourish with a more modern approach. This regrows the piece and imbues it with fresh vitality. The next track, his composition “Aigües Profundes (Deep Waters)” introduces spoken words from the second half of the “Two of Swords” poem, superimposes them over a chorale, but then a violent rhythmic interjection leads into the main melody and groove.

After this, another original in three parts titled “Unity Suite” progressively layers Indian Classical Music with Sardana (a Catalan folk music) and latin-jazz cha-cha-cha into a cacophonous harmony that is at once chaotically discordant and peacefully unified. An accordionist street musician inspired the final full-length track: a contrafact on the jazz standard “Autumn Leaves” titled “Bridge Over The Tiber”. With lilting, quick-shifting rhythms, resemblant of tango and buleria, this song symbolizes the historic flooding of the Tiber river that runs through Rome. The album finishes by recalling its own inception, with the remaining text from the “Two of Swords” spoken over another muted trombone duet that trills and flutters away like a bird flying into the distance.

BIO
I was raised in Bloomington Indiana, by my mother, an actress and educator, and by my father, a Catalan immigrant, a writer and professor of literature. Though neither of my parents were musicians, their art forms (poetry, writing, drama) and musical backgrounds (musical theatre for my mother, Western classical music for my father) influence my music and compositions to this day. My music also contains the influence of artists that played on the family stereo in my youth: Louis Armstrong, Ella Fitzgerald, Miles Davis, J.J. Johnson, Buena Vista Social Club, to name just a few. My older siblings also played a large influence on my musical tastes by introducing me to The Beatles classic hip-hop groups like De La Soul and A Tribe Called Quest.

I was infatuated with all the music and voraciously consumed as much information on the subject as possible. I sang in choirs, studied trombone and both electric and acoustic bass. When I graduated from high school, I was offered full scholarships to both the Jacobs School of Music, for classical and jazz trombone as well as the San Francisco Conservatory of Music to study classical trombone performance. I enrolled into SFCM and learned immensely from their stellar music program and enjoyed living in that spectacular city, but I felt my heart yearn to study the more diverse music of my upbringing. That combined with the news at the end of my first year that my father’s cancer had come back from remission; His prognosis was bleak, so he made the dignified, brave decision to give up his fight and end his suffering.

I took a leave of absence from school and returned home to be with my beloved father in his final days. During those days my father would constantly remind me: “follow your passion”. As his soul’s flame flickered, faded, I would often reflect on his words. His words echoed in my head when I realized that I had not found my passion in my SFCM studies, and that I must do something different. I then transferred to the IU Jacobs School of Music to study jazz trombone with Wayne Wallace.

My cravings for the diverse music of my childhood were satiated at IU. I learned about Indian Classical Music from the legendary sarod player Amjad Ali Khan; deepened my appreciation for rock, soul, funk, and hip- hop in Wayne Wallace’s contemporary jazz and soul class, and I developed an immense interest in latin music through joining Mr. Wallace’s Latin Jazz Ensemble (LJE) and Afro-Cuban ensembles led by him and Michael Spiro. In my time at IU I was honored to have one of my arrangements performed by the LJE, and I got to perform alongside notable jazz artists including Jeff Hamilton, Tamir Hendelman, Michael Rodriguez, Walter Smith III, Rachel Caswell, Wayne Wallace, Michael Spiro, John Raymond and Murray Low in both school and professional performance settings.

In addition to many performances, I also recorded trombone on multiple albums, including on a track of Wayne Wallace’s and Michael Spiro’s GRAMMY nominated album Canto América, and on many of the tracks on Wayne’s recent album Rhythm of Invention. I also recorded trombone parts on fellow students’ projects including Liberation Music Collective’s 2017 release Rebel Portraiture (an avant-garde big-band album composed and led by former Jacobs students and current Chicago musicians Hannah Fiddler and Matthew Riggen), and on LA saxophonist/composer Tim Kreis’s 2019 R&B/Soul EP Are You Listening?.

Perhaps the most valuable of all my experiences though, were my private lessons with Wayne Wallace. His instruction on improvisation, composition, and arranging, gave my self expression a place to flourish. Mr. Wallace helped me find the passion my father had urged me to seek. Out of my abundant gratitude for this, I decided to create an album of original music, under the guidance of Wayne Wallace, and in loving memory of my father, Josep Miquel Sobrer.

All the music in my album Two of Swords is thematically connected to the concepts within the eponymous tarot card, which I interpret using my father’s tarot book called “The Book of Oracles or A Poet’s Tarot”. The card’s overarching themes are duality and balance, which, like all tarot cards, can be interpreted as either a negative or a positive. The card can take on many meanings because the tarot is not dogmatic in interpretation. The cards are like a lens for an individual to view their own life from a fresh perspective. Because the album is a musical tarot card, its message takes on unique and personal connotations for each listener.

That message is woven through the music by voices speaking my father’s text and the text of another (much older) Catalan poet Josep Janés. I employ many different compositional techniques to create a 55-minute-long musical soundscape which stages the poets’ words, allowing ample space for the listener to meditate on them. The album’s musical styles include a mixture of jazz, latin, folkloric and classical music. Some notable musical examples include an intriguingly twisted latin-jazz arrangement of a classical song-cycle by the famous Catalan composer Frederic Mompou, and a musical triptych which combines both Indian classical music and Sardana (a Catalan folk music) with latin-jazz cha-cha. The music celebrates diversity and unity, and when combined with beautiful spoken poetry, it creates a musical journey that captivates the listener’s most vivid imagination.

I think the album will be successful because it caters to a diverse, broad audience, and will be of particular interest to tarot card enthusiasts around the world. It is the first ever rendition of a tarot card into a music album. Also, as my father is a well-known author in Catalonia, the album should gain serious interest there. Since he died in 2015, there has been significant renewed interest in his works as well as works about him by other living authors. His good friend and acclaimed writer and poet Francesc Parcerisas has just this year published an epistolary book of letters between him and my father. Mr. Parcerisas’ book will surely fuel the growing momentum of interest in my late father. In addition, my family has recently signed a publishing deal to reprint a new edition of my father’s original “Book of Oracles” (the book from which the music’s primary text derives) which will be released in 2022. I have already received the rights to use the text from the publisher and am currently working out the details of getting a mention of my album put into the book, which will direct more potential listeners from the book towards the album.

Two Of Swords is a celebration of the diversity and individuality, loss and healing that I have experienced in my life. I hope that by expressing my healing through music I can help others on their path towards healing themselves too. I plan to carry this spirit forward in the rest of the music I make in the future. I have multiple projects planned to be released in the next two to three years, the most exciting one being another latin-jazz genre-bending album which will feature myself on vocals with original lyrics in addition to my trombone playing. I am excited for my future and the future of this album, and I hope you’ll consider promoting Two of Swords as part of that vision. 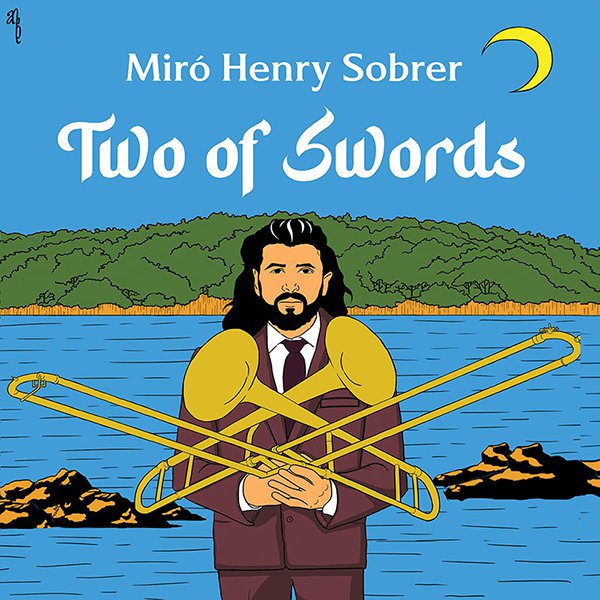 Listen to:
“Make My Life Transparent”