Laura Ainsworth
You Asked For It
On her fourth album of new material (a best-of LP and expanded Japanese CD, Top Shelf, recently joined her discography), award-winning Dallas-based retro jazz chanteuse Laura Ainsworth offers her fans an album of their requests, from great standards in her unique style to unusual choices such as “Goldfinger,” here reinvented as a sultry lounge jazz ballad warning other ladies to beware a toxic ex (it’s the lead-off single with a film noir-style video debuting soon.) To celebrate the end of lockdowns and inspired by Julie London’s classic Julie At Home LP that was cut in her living room, Ainsworth wanted to create a live party feel. So she gathered her loyal band of top North Texas jazz musicians, including keyboardist/arranger and album co-producer Brian Piper, to record the tracks together in the studio with no overdubs or multi-tracking.

As usual with Laura Ainsworth, there are no “throwaway” cuts. You’ll love every song. But pay special notice to those that include the original, rarely-recorded opening verses (you’ll be especially surprised by the intro to “As Time Goes By,” a bonus track available on the Japanese import CD, available in the US on Ainsworth’s Bandcamp page.) She displays her unparalleled ability to convey heartbreaking emotion on “Someone to Watch Over Me,” “Once Upon a Time” and “What’ll I Do.” Noel Johnston’s guitar lends a cool, retro West Coast jazz vibe to “Scotch and Soda.” Brian Piper’s piano and arrangement bring a gently-swinging Latin feel to “Isn’t It Romantic.” As the party draws to a close, each band member gets a solo turn on the Gershwins’ “Love is Here to Stay.” And guests are sent home to dreamland with Ainsworth’s reclaiming of the often oversung classic, “Over The Rainbow.” Taking it back to the raw emotion of the lyric, she recorded it acapella in a single take, with Piper later adding just a touch of accompaniment in the studio, in a reversal of the way most recordings are made.

Drop on You Asked For It and you’ll see why Laura Ainsworth became the first and only artist ever to win a triple sweep of the Artists Music Guild Awards for Album, Video and Female Vocalist of the Year. And why Downbeat contributor Eric Harabadian called her…

“…One of the most talented and entertaining vocalists – of any genre or era – on the music scene today.” 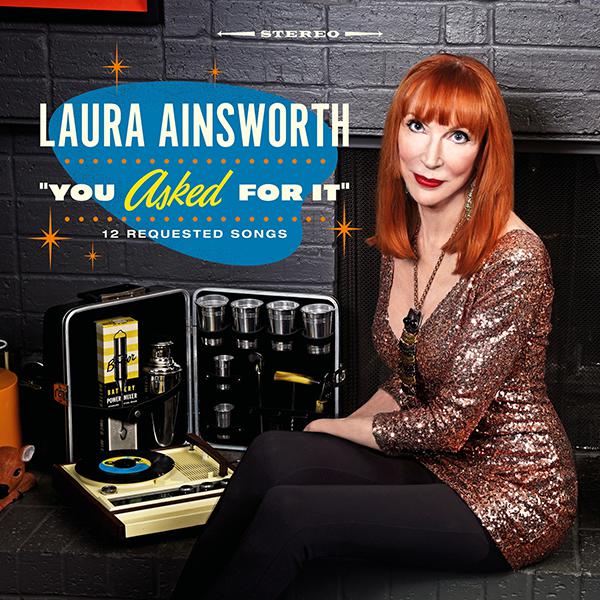 Listen to:
“All The Things You Are”